My only child, Brittany Maynard, died at age twenty-nine of a brain tumor. 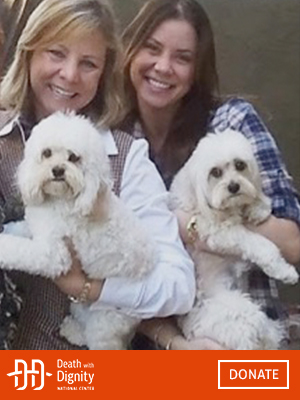 When Britt was initially diagnosed here in California with glioblastoma, she knew her disease was not only going to be a challenge to treat, but that the cancer would take her speech, sight, vision, hearing, continence, and ability to think. She also knew that there was no cure. Fighting a complex terminal disease is difficult, but to do so when the very fabric of who we are is unravelling is torture. My brave Brittany faced the truth sooner than I did: she decided to end her life peacefully using the Oregon Death with Dignity Act.

Once Britt qualified for the medication under the Oregon law, she relaxed, knowing she, not the cancer, could determine when enough was enough. Her beautiful face softened, and there was a new peacefulness in her gaze. My fearless daughter was able to enjoy some of her remaining life. This law allowed me to spend some time in nature with Britt before letting her go.

I’m profoundly grateful that Oregon voters and doctors gave my daughter an option that brought her peace of mind in her last weeks of life. I will always be grateful to Death with Dignity National Center, whose tireless campaigning brought about this law. I’m paying it forward, as Britt urged me to do, volunteering to help Death with Dignity’s efforts for Americans in all the states to have the same option my daughter did.

My husband and I financially support and volunteer for this organization. And today I ask you to make a contribution to Death with Dignity National Center as well.

No mother should bury her child. It took me a while, but ultimately I was forced to look death square in the eye. Death with Dignity National Center eased our frantic struggle as we staggered toward something that flew in the face of the natural order of things. They provided us with information about the end-of-life option and how Brittany would qualify. They showed kindness to my husband and I as we struggled to speak out on Brittany’s behalf after she died.

We feel great loyalty to this organization. Death with Dignity National Center gives the gift of a peaceful end-of-life option to terminally ill people whose backs are literally against the wall. Will you join me before we see the 2016 year out and give a generous contribution to make their work possible?

Our lives are wild and precious, and I promised to my daughter to try to live mine with those words in my heart. That’s what Brittany said she wanted for me. There is so much more work to be done to make sure that all Americans have this end-of-life option.

I’m Brittany Maynard’s Momma and I ask you to support this important cause.

Before I heard of Death with Dignity, I read a very touching true story about two sisters, one who was terminally ill. Out of love for her suffering sister, the healthy sister imported the medicine, which was illegal at the time, and gave it to her sister. She sat in an adjacent room reading while her sister peacefully slipped away. To me, this was the most beautiful gift to give to someone you love and is suffering. I would also give someone I love this gift to end their suffering. Now, because of Death with Dignity, it is a legal loving humane gift and my husband and I financially support this movement.